Robin is a UK Charity Champion for MiHC

Robin is this year's ScottishPower Foundation's UK Charity Champion. We are thrilled that he has become a UK Champion for his 40 years of volunteering to support, promote and fundraise for Music in Hospital and Care Scotland.

His Fit as a Fiddle fundraising challenge in Orkney throughout 2018 was unique: he composed seven fiddle tunes relating to seven hill/ cliff tops in Orkney; he then climbed these viewpoints with seven well known Orcadians who are involved in local arts and culture; once at the top he played the relevant fiddle tune; finally, over past months he has been playing to the residents of seven Care Homes in Orkney. His final care home visit was last Sunday afternoon in Westray, the most north-westerly island in Orkney.

As the ScottishPower Foundation Charity Awards ceremony was being held the next day in Glasgow, we had to leave Westray by boarding the ferry back to Kirkwall at six pm on Sunday. We then drove home to Palace, Birsay to collect our "glad rags" before driving to Stromness. We boarded the Hamnavoe to stay overnight on this Northlink ferry which sailed early the next morning to mainland Scotland. The drive south was treacherous with very thick fog as far south as Inverness. Fortunately, the sun was shining there, and encouraged us on our way. With all this effort we actually arrived early for the ceremony! And wasn't the journey worth all that effort?

The photos below record Robin's success at the SP Foundation's Charity Award ceremony. I have also included a photo of Robin playing above the Old Man of Hoy as part of his Fit as a Fiddle venture; this photo was shown on screen in June 2019 at the Scottish Charity Awards where Robin was a finalist in the category of Charity Champion for MiHC.

The first photo illustrates the announcement of Robin's success as Charity Champion 2019, which highlighted all he has done for Music in Hospitals and Care, including reference to his personal attributes : He is a committed individual with inexhaustible enthusiasm in promoting the aim of the charity to bring the joy of music to all ages in health care settings. Not only is he a dedicated supporter who enthuses others, but he is a kind and thoughtful human being. He embodies the very essence of what it means to be a charity champion and volunteer. 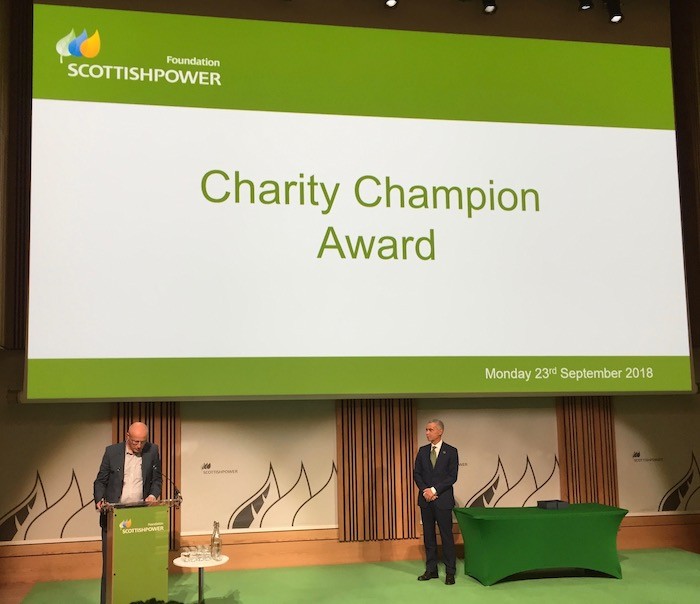 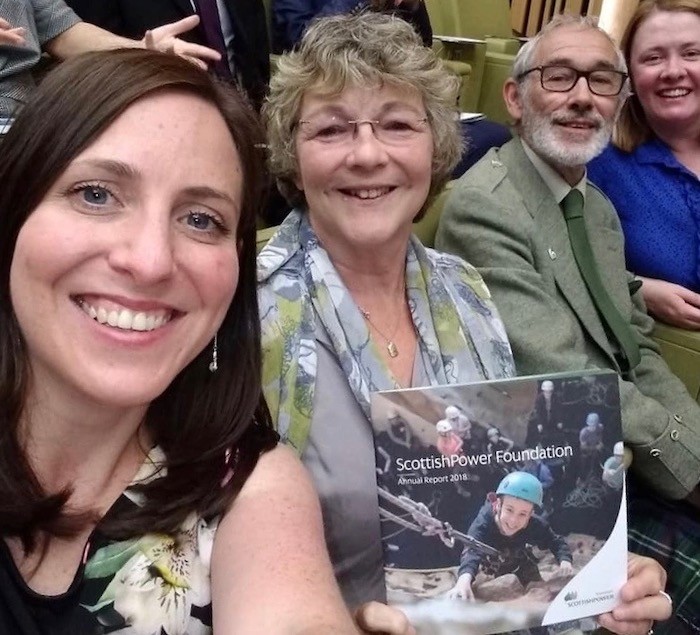 Charity Champion 2019 with his Trophy.

Four happy representatives of MiHC with trophy! In addition to a trophy for Robin, MiHC received a trophy and £5,000 to continue the work of the charity by bringing the #JoyThroughLiveMusic to those in health settings. Orkney and Shetland will benefit due to Robin's Fit as a Fiddle charity appeal. 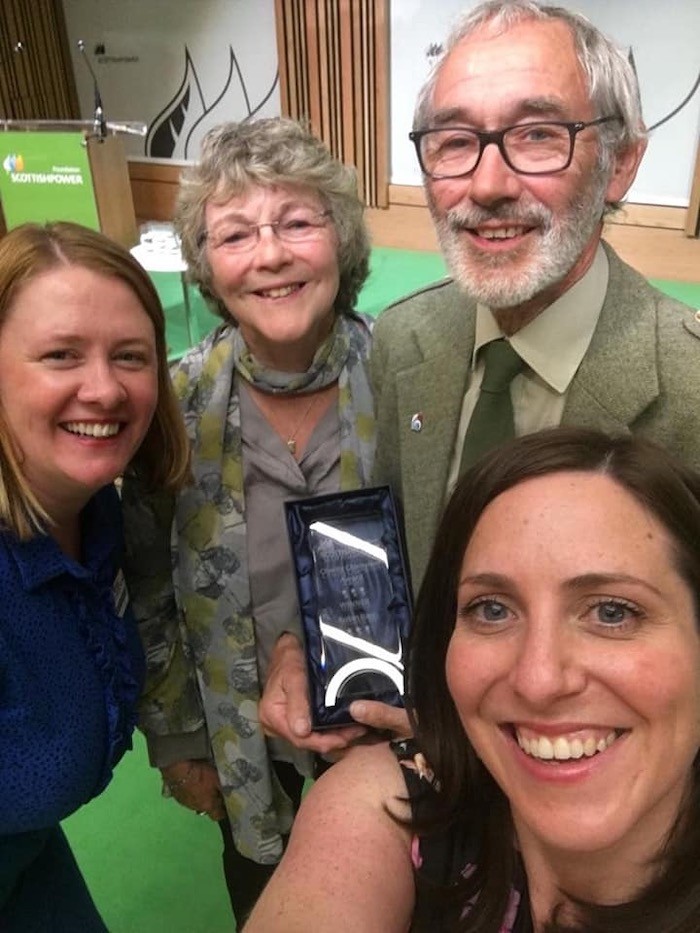 The Happy Couple! The opening of our Annie's Place Garden in Birsay, Orkney over the past few years was also listed amongst Robin's fundraising efforts for MiHC. 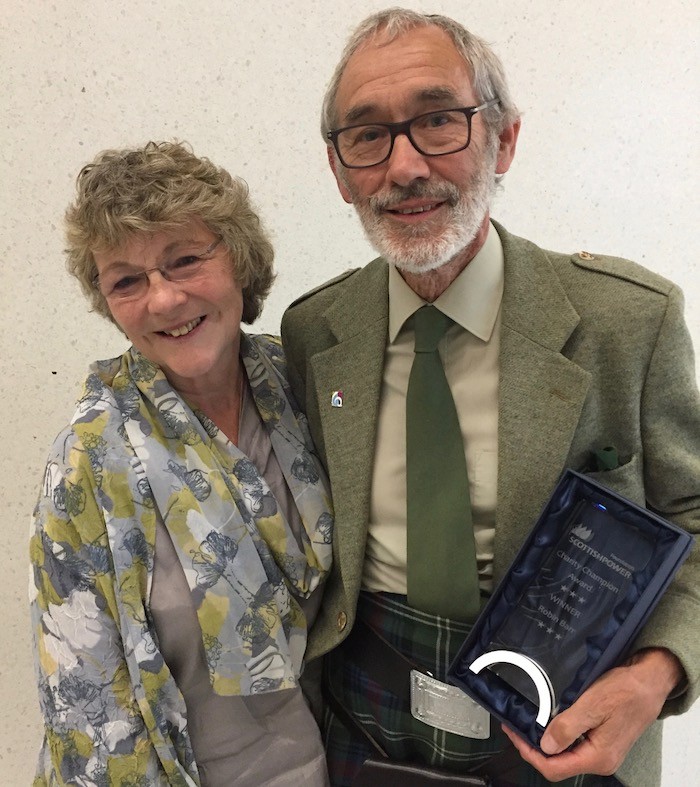 All finalists and runners up in the 2019 Scottish Power Foundation Charity Awards. 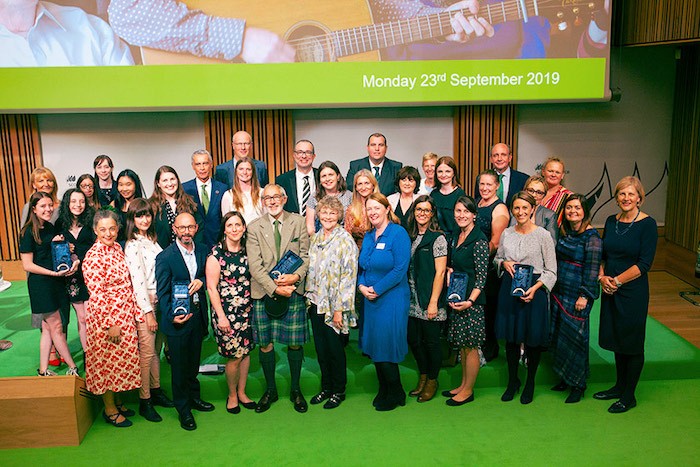 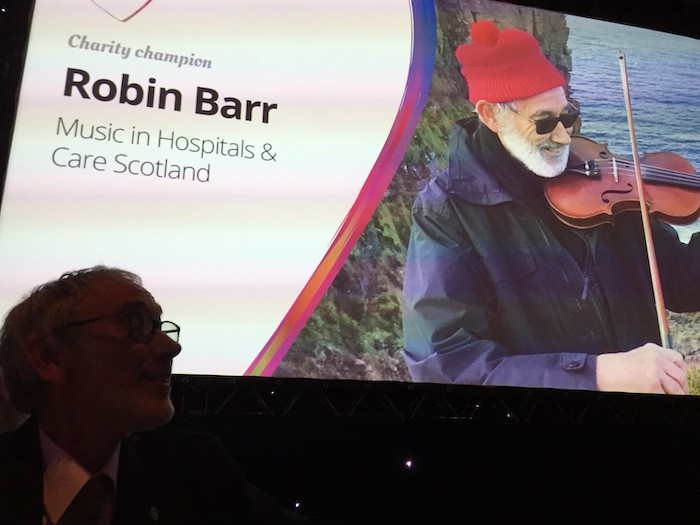