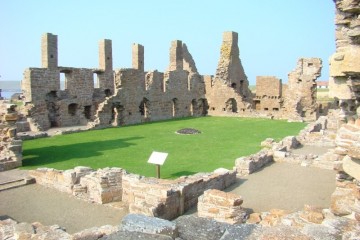 Birsay has a long and interesting history dating all the way back to the earliest settlements of the neolithic age.

Traces of these early explorers can still be seen in the landscape with their ancient stone circles and burial cairns casting an air of mystery over heathered moorland. Every walk you take in this unique landscape around Skara Brae confers a sense of being involved in a story that spans the centuries.

From your window at Annie’s Place, you will see the ruins of the Earl’s Palace built in the mid-late 16th Century by Robert Stewart, half-brother of Mary Queen of Scots. 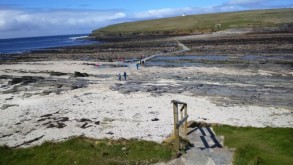 Robert, and his son Patrick, were known as the Black Earls.  Arrogant and violent, Robert was imprisoned for a time for treason, and Patrick was executed for treason in 1615. They were not mourned in Orkney.

St Magnus Church, next to Annie’s Place, is reputedly the place where the bones of St Magnus were first interred. Founded in 1064 A.D, of special interest is the late Victorian stained glass window, with a highly romanticised version of two episodes in the Saint’s life: on the left, his refusal to fight for the King of Norway against the Welsh and on the right, his martyrdom. 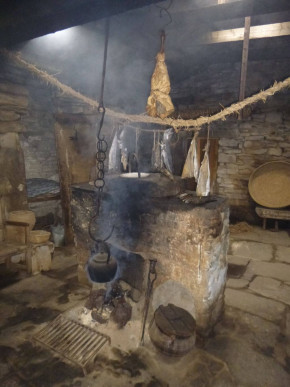 The Brough of Birsay (Tide times) was populated at one time by the Picts. Later it was used by Viking settlers.  The remains of the Viking settlement are among the largest and best preserved in Europe. A walk to the Brough is highly recommended and will take you only 10 minutes; just keep an eye on the tide.

On the north side of Boardhouse Loch, you can enter Kirbuster Farmhouse Museum, which we recommend to all our visitors. Here, you can experience 17th century life in Orkney, a real farmhouse, as it was, with open fire in the centre, hen loft in the corner, and fish smoking over the peat fire flame. You can thus make a mental link with the Skara Brae people of neolithic times, yet the farmhouse was still inhabited like this in the 1960s ! It is the only example in northern Europe of a “fire hoose” (see photo)

Nearby, Barony Mill harks back to the days of water-powered meal milling. In the museum you can see various stages of bere (the local form of six-grained barley) being ground as well as numerous photographs of the area.

Orkney’s clean and remote location mean that you can find plants and wildlife here that exist nowhere else in the World. You’ll be very fortunate to spot an Orkney vole, otters or the delicate Primula Scotica but they are here!

Throughout the year the birdlife changes as Orkney is directly on the migratory routes of many species who visit seasonally or pass through on their way to Southern Europe and Africa or back to the Arctic regions. The Loons water birds RSPB hide is just up the road, and Marwick Head RSPB sea birds reserve is but a morning walk across Birsay Beach. Or you can sit on our shorline bench and watch a wide range of seabirds, ducks and waders with small murmurations of starlings a regular sight in the skies above.

Annie's Place is perfect for walkers with no need to use a car. There are walks for as far as you want to go along the shoreline in either direction from Annie's Place front door! More specifically The St Magnus Way  goes through Palace village and we recommmend going in a northerly direction by the houses in Northside and beyond, walking along flower laiden cliffs with fulmars and gannets always close by! 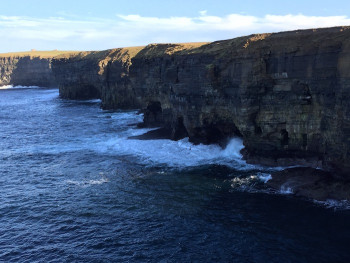 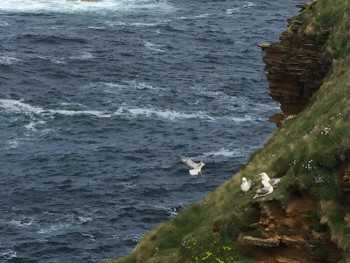